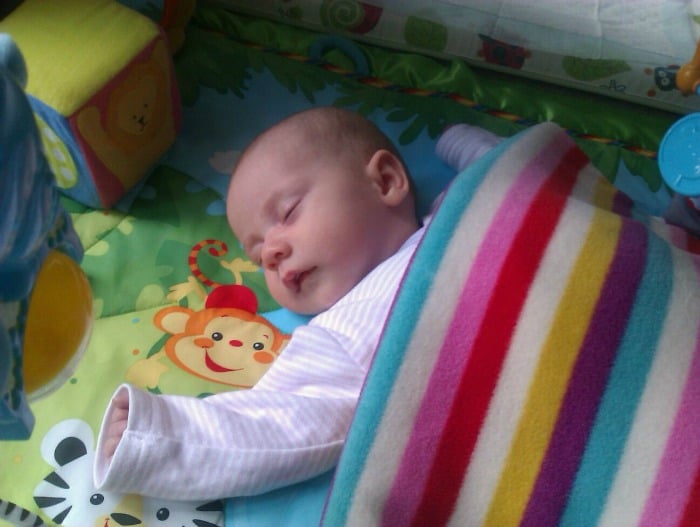 If you’ve read How I Prepared For Labour & Having My First Baby, you’ll probably already know  I left a bit of a gap between my first and second child.  I would definitely call myself an older Mum this time round at the age of 37.  My son is now 16 years old, 6’2”, size 12 shoe and a far cry from the 6lb 12oz squidge that arrived in December 1997.  Let’s just say that I didn’t want to rush into anything when deciding to have a second baby.  That’s not entirely true, it’s more a case that the circumstances weren’t right before then.

My second baby arrived in March 2012, and she is now 22 months old and her labour and delivery seems like such a long time ago now.  She is our our little Princess, also known as Indie.    She is totally a Daddy’s girl, and she has her big brother wrapped round her little finger too.  She’s been known to call him Daddy from time to time which does make me smile.  She melts the otherwise petulant teenager into a kind and playful giant which is adorable to watch.

Being pregnant at 22 and at 37 are completely different experiences.  Strangely enough, labour and the actual birth weren’t that different though.  Having a baby earlier in life is simply what the body is designed for.  I personally found it considerably harder as an older Mum, compared to the water of a duck’s back experience I’d had at 22.  Admittedly age wasn’t the only factor, and my BMI definitely contributed to finding the second pregnancy physically harder to cope with.

Being Pregnant and Overweight

My increased BMI had other consequences also.  The experience with the sonographer at my 20 week scan was horrendous!  I had not realised until that point that if you carry a little extra belly fat, the sonographer can’t get as accurate a picture of the baby as some of the ultrasound is absorbed before it reaches the baby.   The sonographer repeatedly sighed throughout the entire scan.  She was a right grumpy old mare to put it bluntly.  I kept asking if anything was wrong, and she wouldn’t tell me what the issue was.  You can imagine the state I got my pregnant self into can’t you?

Discussing weight with women is a difficult issue, but it can be done, with sensitivity and honesty.  We know we’re overweight, it’s ok to talk about it!  I didn’t really understand what was happening until sometime after, and I certainly would have been less passive about it had I’d have realised why she was getting frustrated.

Don’t be afraid to speak up if your having a negative experience with a medical professional!  Everyone deserves to be treated with dignity and respect during their pregnancy whether they are overweight or not.

Preparing for Having Our Second Baby

During my pregnancy I made my husband watch ‘One Born Every Minute’.  This was my husband’s first child and I wanted him to be prepared for labour and how I wanted him to support me.  I’d stumbled across The Bradley Method which supported the idea of a husband or partner being coached in natural childbirth.  It’s basically about the Father taking an interest in your relaxation and coping techniques so he can advocate for you in childbirth and labour, so you can focus on the important bit of delivering your baby.

I wasn’t entirely comfortable with my husband leading my labour efforts, as he was a complete novice but I took from it the bits that would work for us from researching it on the internet.  My husband was so relaxed about it all, he went to work when I said I was in labour.  He was like ‘Your not buckled over yet!’.  Fortunately for him, I was strangely in control and had a complete sense of calm. I was quite happy walking up and down the river near where we lived focused on getting the contractions moving and working for me and my baby.

The worst part of my labour was the drive to hospital.   It was rush hour on a Friday and contractions were coming thick and fast.  That was when panic set in.  My husband was clearly focused on getting us there.  Breathing and staying calm were not in the fore front of my mind!  When we arrived at the hospital, I literally crawled through to the delivery suite,  with the midwife kindly opening the doors for me as I struggled with walking and contracting.  The examination revealed I was already 8 cms dilated, so there really wasn’t far to go, and my pain relief options were limited at this point.

I’d not had a great time with gas and air with my first labour, to be honest it made me feel quite sick.  The midwife talked me into giving it a go, and this time it worked and I was able to calm down and focus on the matter in hand.  There was aromatherapy oils available, I had my IPod in the docking station provided and then I was in the zone.  I could focus on allowing  my body help this little baby come into the world.  The fact that my husband was reading the news on his phone did not bother me.  I heard the midwife say at one point ‘She can take a lot of pain’.  I really wasn’t aware of any pain at all.  All those relaxation podcasts before bed were paying off!

Our second baby was born within 2 hours of reaching the hospital, and it was a natural childbirth. Medical assistance was on standby, but just like on the TV, the midwifes started a game of ‘beat the doctor’ and the baby was delivered with very little intervention.  It was pretty amazing really.

It’s important to have an idea of what you want in labour, and preparing yourself for that happens way before you get into the delivery room.  Have some idea of what you would like to happen during labour and childbirth but be open to everything.  The birthing pool may not be available when you go into labour, for example.  Most importantly, do not be afraid, be in control of your experience, and enjoy it!  Our bodies are designed to give birth and having faith that you can deliver a baby will really help you to have a positive delivery.