Little Tinkerbell is two month’s old today.  Where on earth did that go.  It doesn’t seem like 5 minutes ago I was posting where we were at on her one month birthday, but strangely enough pregnancy seems light years away.  Things are definitely changing, stuff’s getting easier and we are full on in the swing of it all now. 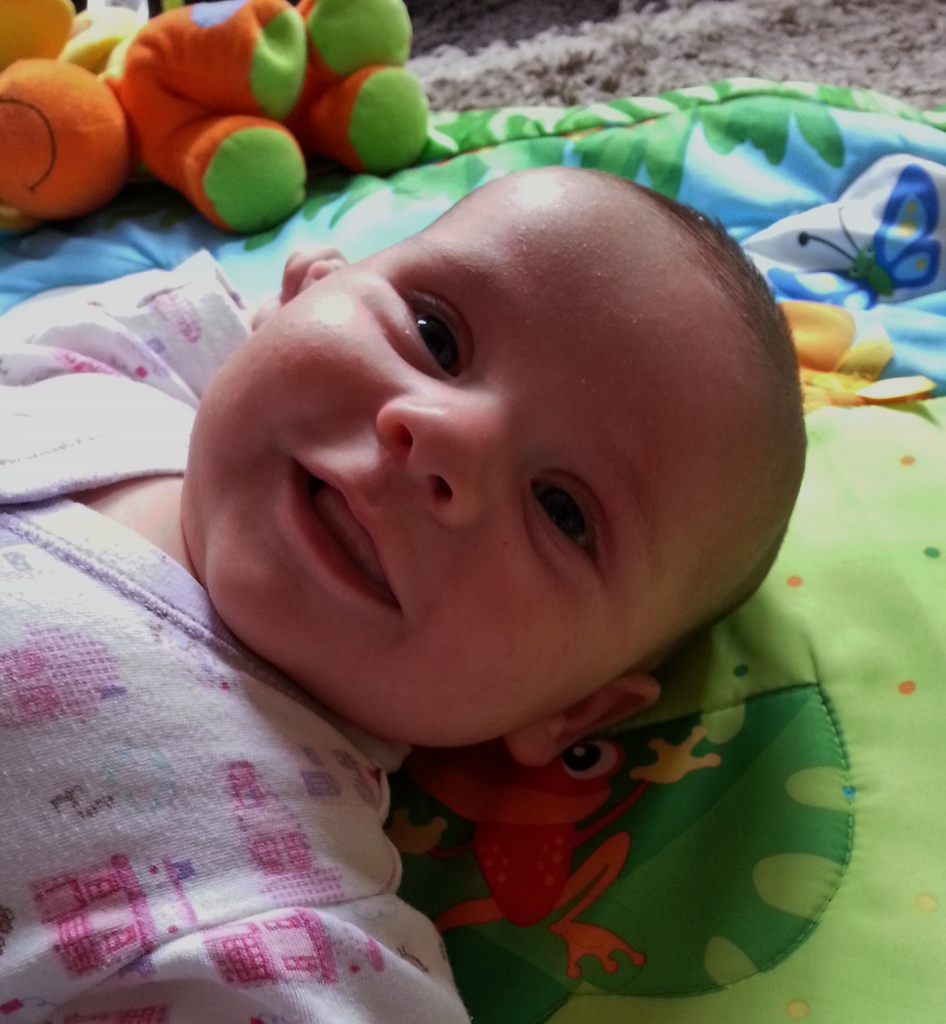 She went for her 8 week check yesterday and got the all clear from the Doctor.  The Doctor was really impressed with how interactive she was.  She loves to laugh and coo, she’s going to be a right little talker one day, just like her big sister.  She was a little grumpy, so the Doctor suggested she wanted a feed.  You get the old boob out just to keep them happy, but I knew she just wanted a little chat and she laughs in the face of the nipple.  The Doctor was very surprised.

She also had her 8 week immunisations.  I fully support the immunisation program but it’s still horrid.  She cried, A LOT! She was really grumpy all evening too.  We gave her a small dose of Calpol, but to be honest it didn’t make any difference, poor little mite.  She’s a lot better today though so hopefully that’s the end of it, well for 4 weeks anyway.  To hit their tiny little bodies with all these bugs in one hit seems a lot, but I trust it’s for the best.

Feeding   Breastfeeding is going really well and is much easier unless it’s a really hot day.  There’s more of an update in my Breastfeeding Diaries but time between feeds is getting longer.  Unless we really have to go out, I’ve been staying in with her.  It’s a lot cooler in the house, and she seems quite happy.  We both enjoy the peace and quiet after having a full house over the weekend.

I’m so much more confident and relaxed about feeding in public than I have ever been.  I’m thanking blogging and social media for that.  Reading, posting and tweeting about breastfeeding has really helped me to normalise feeding in my own head and not care what anyone else thinks or be self conscious about it.

Weight   I’m not overly obsessive about Tinkerbell’s weight.  I think you can weigh a baby too much sometimes and become obsessed with small changes.  Giving a few weeks between weigh in’s (unless there are genuine concerns) shows real change. Going to the weigh in clinic every week can be the start of a neurotic Mother, and she isn’t a particularly easy kind of Mother to be around.

On 10th July Tinkerbell weighed 11lb 4oz.  She’s on the 75th percentile.  According to her chart she’s around 12lb 5 oz now.  She’s definitely growing and filling out her clothes so we’ll pop to clinic when we haven’t got anything else on.

Concerns   We were really concerned about her skin and the spots she had last month.  They were so dry they were like sandpaper.  I started putting E45 on her.  It soaked straight into the skin and I was applying it every hour when she started scratching.   It’s cleared up a lot now.  She’s got a few spots and a forehead gets a little dry but I’m only having to put cream on every few days now so it’s got a lot better.

She has been really congested as well.  I suspect this is a hangover from her quick birth.  It can take up to 3 months for all the  mucus to clear their airways.  We’ve started to use some saline drops after the Doctor recommended them in the hope it helps her breath a little better.

Development   It feels like it’s not all about breastfeeding now as she does other things and play is becoming more important to her. Her head is a lot steadier now, still wobbles a bit though.  She’s started having tummy time to get stronger.  She really enjoys her gym and can give the toys a good bash.  She also loves looking in the mirrors.

She’s really trying to roll.  She can get on her side, but not all the way over.  It won’t be long though.  I’m quite happy for her to stay still a while longer, movement just brings a whole new dimension to the parent game.

She loves to talk to me, or anyone else who fancies pulling some faces at her and cooing.  She smiles when I smile and is desperate to make little sounds.  She watches faces with interest and people when they leave the room.  Especially her Daddy and Big Brother.  She gives her Big Sister some smiles too which makes little Princess very happy.

Sleeping   A routine is slowly forming.  In the morning she wakes up for feeding, changing and some playtime.  She takes a nap between 9-10 for up to 2 hours.  More feeding, pooping and playtime follows before some afternoon kip.   The evenings are still unpredictable.  She may or may not cluster feed.  She may be awake most of the evening of she may sleep from around 8pm until maybe 1am.  It’s not fallen into a natural bedtime pattern just yet, but it will come, maybe by the next update.

She’s also been to her first theme park.  We all went to Drayton Manor for the day, but I’ll fill you in on that another time.

How’s Mum Doing?  I’m doing really well, I’m pleased to say after the issues I experienced in pregnancy.  All the water I retained during pregnancy flushed out of my system a few weeks ago now.

I’ve been trying to be healthy, and so far I’ve lost 18lbs! I’m so pleased with this and it’s made a difference to little niggles I was having in my knees already.  Find out more in my Thinking Thin series if you ‘d like to pick up a few tips.

Generally I’m coping well, I feel I’ve recovered from the procedures of labour, but I believe recovering from pregnancy and childbirth takes a lot longer but looking after my body better can only help.

Do you have a little one?  How are you finding it all?  I’d love to hear how your getting on so please do leave a comment. 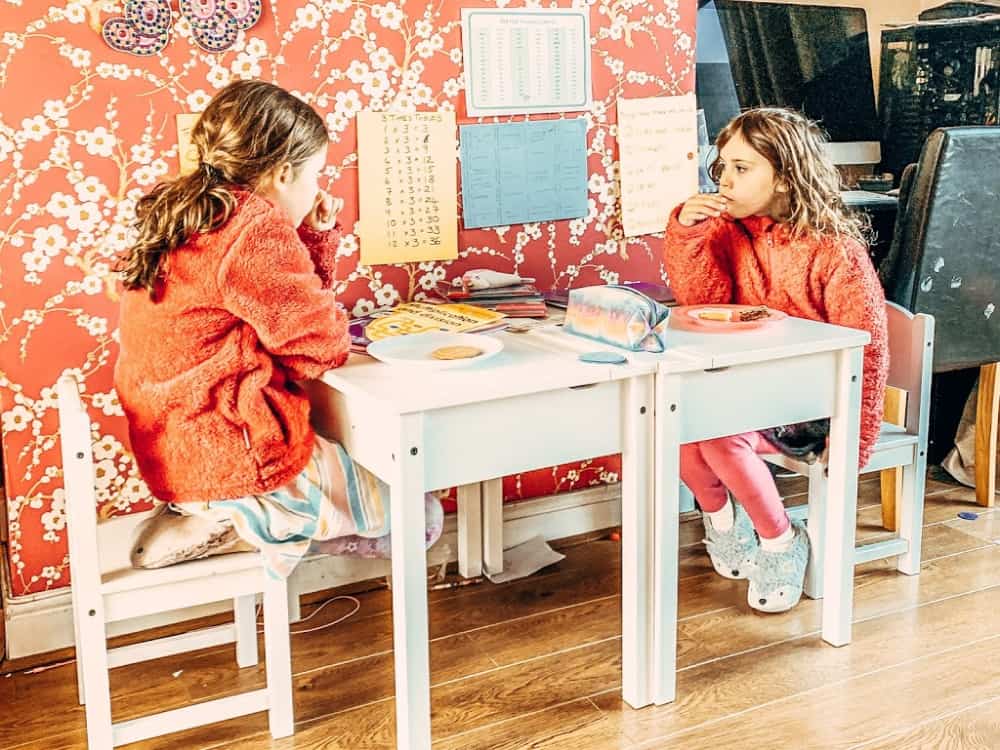 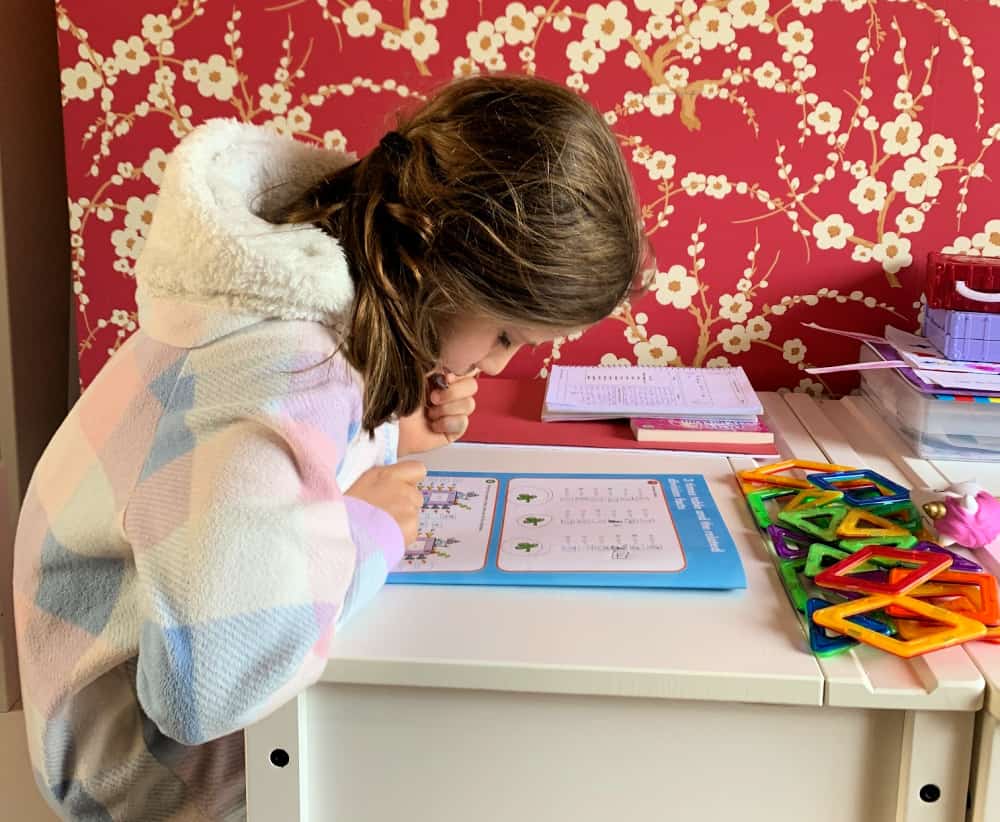 Getting Started with Home Learning during Coronavirus