Right guys, you gotta help me out here.  I’ve been having some really crazy thoughts recently.  Some of my friends have been showing off their gorgeous newborn babies, and oh my word, it’s making me feel broody.  It’s completely insane, as rationally the thought of going throw another pregnancy is just too much like hard work.  Having a 3 year old and a 1 year old is also hard work, but it is getting easier.  Throwing another baby into the mix would just be ludicrous.

If you were reading this blog during my last pregnancy, you’ll know I had a pretty hard time.  I suffered from pelvic girdle pain from really early on, and to get straight to the point I became an emotional wreck pretty much from the word go.   I went overdue, which was pretty much like daily torture and I ended up being induced early due to the physical and emotional strain it was putting me under.  Gosh, I’m starting to feel less broody already! However, if I’m honest, I could have probably done with seeing a more professional obstetrician. For example, my cousin in Australia dealt with Dr Malcolm Godfrey and couldn’t praise him highly enough. The service was fantastic and he was always their to give advice. This is one tip I would definitely recommend you to take on, get in contact with a pregnancy specific doctor or obstetrician.

All of this has made me think a lot about the reality of being pregnant, and how tough it can be on us women.  Granted not everyone suffers with a huge amount of pregnancy related symptoms.   Some ladies breeze through the process, but some of us don’t, especially if your a bit older and carrying a little extra weight like me.

For those women who don’t bloom during the nine months of carrying a child, this is what pregnancy really looks like.

The Reality Of Pregnancy 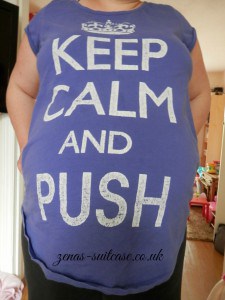 Despite going through all this we have the most gorgeous girls, and I wouldn’t change any of it.  Would I put myself through it again.  Sadly not, my baby making days are officially over so I hope these broody feeling pass sooner rather than later.