If you’ve been following my blog and social media, you might have noticed that I have just been to the amazing city of New York.  Welcome to the first of many posts about our trip to the ‘city that never sleeps’.  If you are planning a trip to New York City, I really help you find the hints and tips you’ll find in this mini series helpful and inspiring.  The first post is about getting to New York, which was an experience in itself! 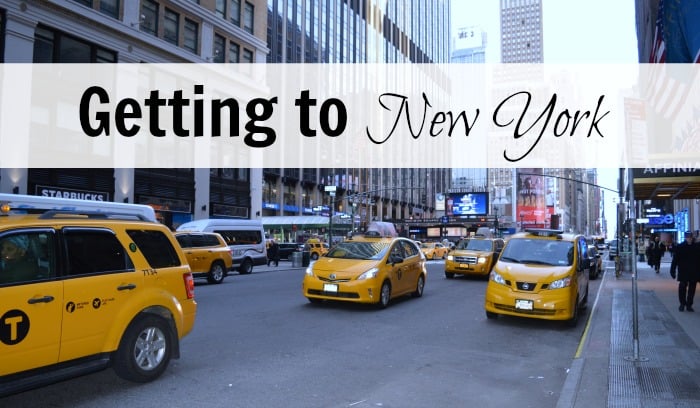 Teen and I were so excited about our first trip to New York.  I had spent hours planning every leg of this trip to make the most of our short time in the city and what might be the last holiday I get to spend with my 18 year old son.  When the day finally arrived to make the journey, there was a part of me that didn’t think it was real.  We were heading to one of the most exciting cities in the world!  I could hardly believe it.  Getting to New York was part of the fun too, as we hadn’t flown long haul before or been anywhere in the USA.

The drive from Nottingham to Heathrow Airport was plane sailing.  The M1 was kind to us and we got to the airport with plenty of time to spare.  I hadn’t realised how straight forward getting to Heathrow Airport was by car, so I would definitely consider flying from here again for other holidays.  I scored a fantastic deal on airport parking and it only set us back £17 for 5 days with the winter offer.  Happy Days!  Getting to New York was going well so far.

Heathrow Airport is huge, and our flight departed from Terminal 5.  We caught the bus from the car park and were dropped of right where we needed to be.  We were about an hour early for check in, but a lovely steward helped us get our boarding passes sorted so we could get ourselves through security and settled.

We decided it was time for a lunch break, and my son and I enjoyed a burger at the Wetherspoon’s in Terminal 5.  It gave us chance to catch our breath and enjoy some free WIFI.  Equally as important to teen and his blogging Mum! 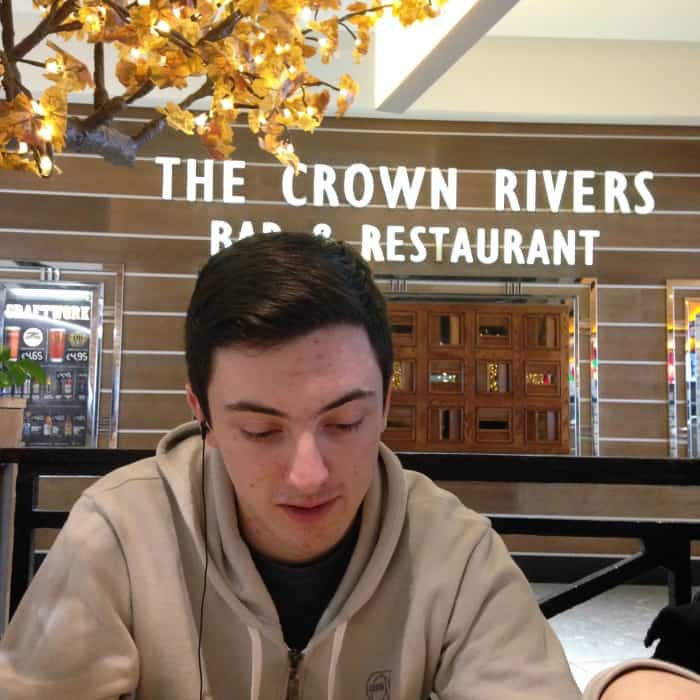 After shopping for a few travel essentials, we headed to our gate on the airport train.  It was free of course and got us to gate B without any hassle at all.  I had booked our flights through Travel Up after finding a deal through Skyscanner.  I had booked the flights with Iberia Airways, but it turned out it was a British Airways flight.

We sat near the emergency exit which meant not much window to see out of but lots of leg room.  Leg room wins every time for a 7 hour flight so was a good call. We got cosy under our fleece blankets and enjoyed the complimentary food and drink and inflight TV.  I was so pleased to see some old episodes of Friends.  Perfect for a trip to New York.  My challenge was not to laugh out loud and get funny looks from the other passengers! Teen saw The Martian for the first time.

The flight was perfect.  Hardly any turbulence and the service was brilliant.  I would fly with British Airways again, no problem at all.  The food was nice, the free bar went down very well and we had a very comfortable flight. 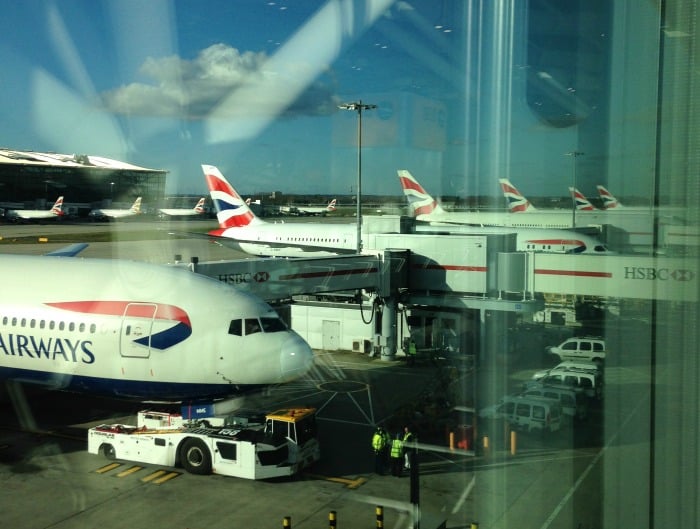 From the moment we got off the plane, everything that we experienced from that point on seemed to fulfil the New York stereotype we have been served through the TV and media.  The accent, the dress, ethnic minorities in low paid jobs.  There was something a little uncomfortable about it if I’m honest.

We got though border control after sharing our finger prints and mug shots with the officials and made our way to the location where the bus was going to depart from.  At this point you realise there is nothing to be gained in having cabin bags only, as you have to wait for all the travellers who have to collect their luggage and will be travelling with you.  There were further delays as the bus was stuck in heavy traffic.  You really have seen nothing like it when it comes to cars in New York.  It is mental.  Take London and times it by 10, seriously!

I have to give a quick mention to the toilets at JFK.  The ones in the waiting area near ground transportation are horrendous.  I don’t think they had been cleaned in a week.  There was a strange brown substance on the floor in one cubicle that I can only make assumptions about.  The doors are a token gesture to privacy and look like something better placed in Orange Is The New Black.  There is definitely room for improvement here JFK!  It turns out this is pretty much the same for all the toilets in New York City, if you can find any.  There is definitely a shortage of public convenience’s and enter McDonald’s at your own peril! 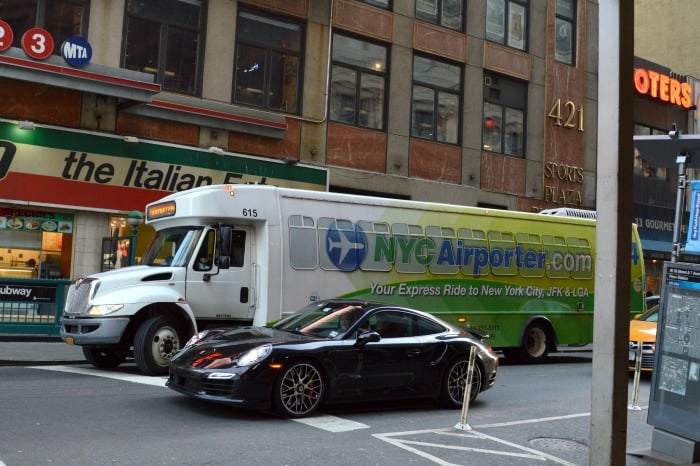 The airport bus driver was a character.  He was quite abrupt, but then after dealing with rush hour New York I think I might be too.  He didn’t mean anything by it, he was just trying to get his job done.  As there were a few drop offs, and of course, we were the last, we got to see a lot of this great city in our nail bitting bus ride.  There was a part of me that felt like we had taken our life into our own hands.  My stomach is still in that bus, waiting to catch up with me.  It was certainly an experience weaving in and out of the lanes, horns beeping and lights everywhere.  As introductions to New York go, it took me and my son through a range of emotions in the hour or so we spent on that bus.  Perhaps we should have taken the train after all. 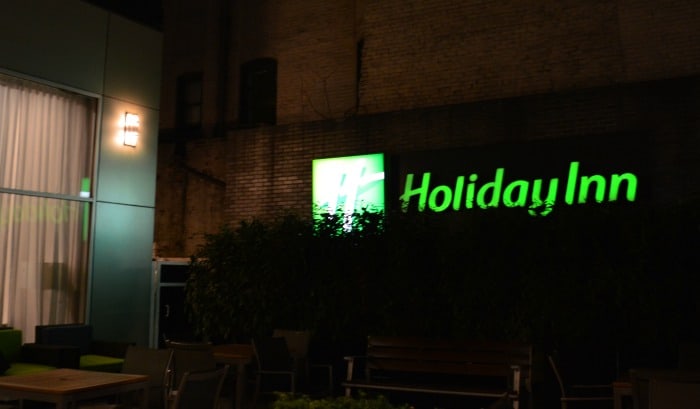 So we finally arrive at the Holiday Inn in Chelsea after a very long day travelling.  We are given a very warm welcome by Carlos who offers us a drink while we wait for the receptionist.  We drop off our bags and I’m hungry so decide to go out and find a bite to eat.  It’s now 10.30pm so our options are a little limited.  We could walk to Times Square, but decide that sleep is definitely a priority so decide not to venture to far afield.

We see the familiar golden arches just down the street and decide to stick with what we know at this point.  This will be the first and last time we go in Mcdonalds in New York.  It is basically a homeless shelter in the guise of a food chain.  What are you doing McDonalds?  I think you need to invest in some security as the staff were in no position to tackle the young man who was clearly having some issues and shouting at everyone.  It seemed like a daily occurrence.

I ordered a Big Mac after scanning the menu.  I hoped it would come pretty quickly too as we were really starting to feel uncomfortable.  You’d think fast food in New York would be super fast wouldn’t you?  Think again!  It took ages.  I think they were making each burger to order.  It came eventually and we reluctantly took a seat in a spot that seemed to offer the least colourful characters.  Perhaps a cold burger in the hotel room would have been a wiser choice at this point.

I got ready to enjoy my Big Mac, and opened my burger box to find that there was nothing big about it.  It was hunt the burger time!  It was no longer a Big Mac, but a slim Mac.  Not quite what I was expecting, but it filled a hole late at night!

We retreated back to the safety of our hotel room to get a good nights sleep and hoped for a better day tomorrow.  Don’t disappoint us New York!  Do keep an eye on the blog to catch the next instalment of our trip!  Getting to New York is only the start of the adventure. Find out what happened on Day 2 right here!