Recently I’ve noticed Princess has developed the ability to not tell the truth or tell a little lie if you will.  It’s surprised me really, as she is only 3, but she has definitely worked out that sometimes the truth has consequences that she doesn’t like.  In an effort to avoid those consequences she has become slightly economical when it comes to disclosing the actual events that have happened.

I wouldn’t say she is particularly good at it.  When she doesn’t want to tell the truth, she usually has a big grin on her face and will break into laughter when challenged.  I have no doubt that she will work on this though.  I can remember several situations as a child where I tried to hide the truth from my parents, and I worked on it until I became as convincing as possible. 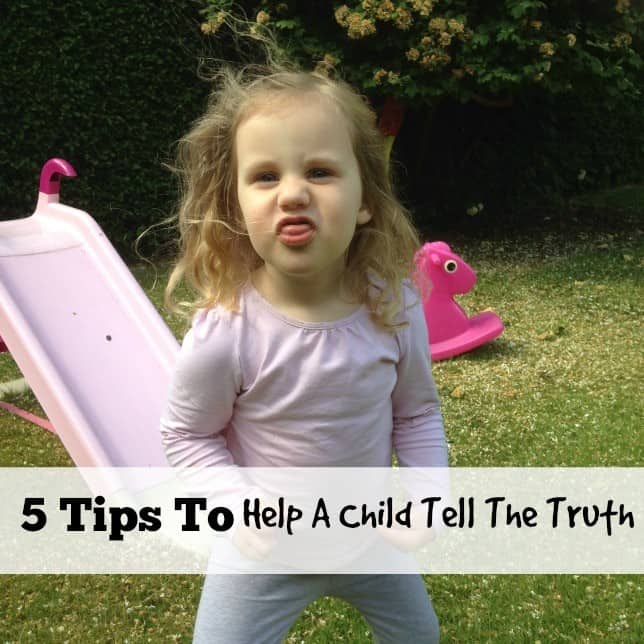 Of course, I was usually caught out.  Lies do have a way of catching up with you.  It’s all got me thinking though.  I really don’t won’t to encourage Princess’s new found skill in deception, so I’m getting in there as early as possible to discourage her from lying to us.  I’ve come up with these 5 tips to get her to share the truth as quickly as possible in the hope she breaks this habit fairly quickly.

How To Encourage A Child To Tell The Truth

1. Speak To Your Child Alone If Princess has an audience, she tends to play up to it.  She craves attention, any kind of attention!  To avoid her getting the wrong kind of response to her behaviour, talking to her alone gives me much more control over the message I want her to receive about her behaviour and means I am more likely to get to the truth.

2. Keep Calm This has to be my parenting mantra at the minute.  For much the same reasons as above, I do not shout or raise my voice.  I calmly ask her what has happened.  If she repeats the same lie, I tell her why the story isn’t adding up.

3. If You Know What The Truth Is, Use It In every situation I’ve come across so far, it has been fairly obvious what the truth is.  Most of the time, us parents do know what has actually happened.  Some direct questions usually get you to the truth pretty quickly.  Instead of saying, ‘did you take the toy your sister had?’, I’ve started saying ‘where is the toy your sister had?’.  She feels compelled to answer this question with an honest answer, for now anyway.

4. Offer Support And Encouragement Princess responds well to positive attention.   I’ve found reminding her that it’s ok, we can fix what has happened, helps her to realise she’s doing the right thing.  Helping her to put right the wrong that has occurred, by saying sorry to her sister usually, helps her understand that the consequences aren’t so bad after all.

5. Use Body Language Older children can be more persistent with avoiding the truth, and less susceptible to the techniques mentioned above.  A simple signal with the hand to stop talking is a clear sign you are not accepting their version of events.  You might have to repeat steps 3, 4 and 5 a few times to get to the bottom of things but used consistently your child is less likely to think that lying is going to be successful.