One thing I find really hard about having children of such different ages, is writing about them on the blog all equally.  I guess featuring them all equally is difficult when they are at such different stages of their lives, and possibly a tall order.

So that’s where the idea came from for the family update.  It means I can talk about each of them, knowing they have all got some air time on here, and there is something for us all to look back on.  There’s been a lot happening since last time, so we are definitely due a catch up. 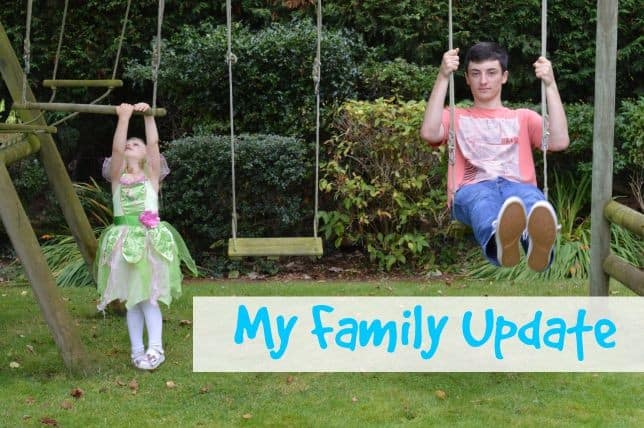 What’s The Teenager Been Up To

He has been on his summer holiday, and quite a bit of time has been spent in his dressing gown in front of his computer.  He has had 2 bashes at his driving theory test, and sadly failed both.  I say sadly, as I’ve paid for them.  If he fails again, he’s picking up the bill.  I really wish I’d have put this stipulation in sooner.  I find money is incredibly motivating for my son.

He was roped into some work for me, when we had a days filming at the house.  You may already know if you follow my blog that I’ve been working on a campaign with Barclays and Lifeskills called ‘Diary Of A Parent‘.  For the final episodes, the creative agency came to our house to finish of the filming.  We were sent through some ideas about how the episodes could work, and they suggested teen finally made an appearance, in not one but all 4 episodes and the trailer.

He did take a little convincing to take part, but when push came to shove, he pulled it out of the bag.  He was brilliant during his acting debut, and I was really proud of how professional and co-operative he was.  These episodes will be hitting your laptop screens fairly soon so I’ll keep you posted.

The other major event was the exam results.  They were issued last week, and we were all keen to see how he’d done.  Teen came out with an A for Maths, B in Further Maths, B in Physics and B in ICT.  Pretty good grades by all accounts, but I know he was disappointed.

I think he played just a bit too much Counter Strike when he should have been revising.  He wants to get a paper remarked for Further Mathematics and retake Physics next year.  I hope he isn’t putting too much pressure on himself, as I know whatever he does or which ever University he goes to, he will do absolutely fine.  Exam results are a very small part of a very long journey at the end of the day. 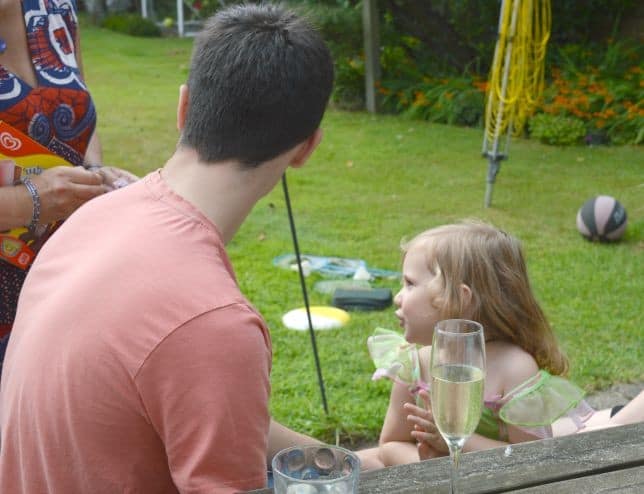 Princess has presented us with some challenges with her behaviour recently which I have only touched upon in my blog.  It’s not something I want to dwell on, as she is so many things, and being naughty is just a very small part of who she is.

I was speaking on Radio Nottingham recently about whether smacking should be made illegal in this country, and I touched on my 3 year old’s behaviour.  She hits out from time, at me, her Dad, her friends and even her brother.  It’s not a particularly pleasant experience when it’s happening and it’s made me really worry about her development at points.

I was put on the spot a little and didn’t have a great answer waiting for him.  Basically, it boils down to labels.  I want her to understand that her behaviour isn’t acceptable and she can change her behaviour.  I don’t want her to think that she is a naughty child, and that this gives her a ticket to behave badly all the time.

In all honestly, her behaviour has improved dramatically, and the outbursts have become far less frequent.  I talk to her a lot about staying calm and what to do if she feels angry, like come and talk to me or her nursery teachers.  We know these outbursts happen when she has eaten to many sugary foods or is tired, so we watch her diet and are really careful about sticking to her routine. 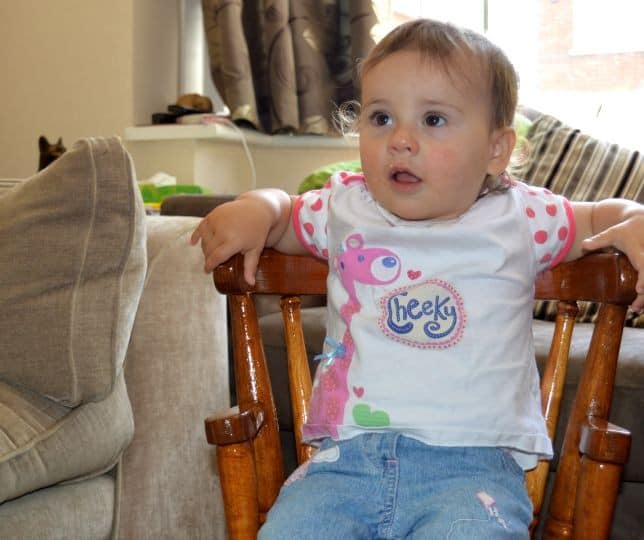 This cheeky Little Pudding is doing so well at the moment.  We’ve been waiting and waiting for what seems like ages for her to walk, and this weekend she finally took her first steps.  Daddy, Princess and I were there which was lovely.  If you pop over to my Instagram feed you can see a little clip of some of her first steps.  It’s the cutest thing watching babies find there feet.

I know it will only take her a few weeks to get in the swing of being on her feet more and more, then we won’t remember a time she didn’t walk.

Her talking is coming along too.  She says and signs Mummy and Daddy really well.  The rest of the time she is just very vocal with lots of babbling.

I’ve been teaching her more signs and she’s picking them up really quickly now.  She will tell you if she needs a nappy change, if she wants more food or if she’s finished.  I need to remember to use it more often with her to help her get less frustrated.

She’s picking up a few bad habits from her big sister, which is to be expected I guess.  She has to hold her own a bit as Princess doesn’t think twice about snatching a toy or pushing her out of the way when she wants to get something.  Managing this little relationship is possibly one of the biggest challenges I’ve faced as a parent, but we will get there.  I can see it’s going to get easier as they get older and can begin to play together more.

What Else Have We Been Up To?

It’s been really busy here to be honest over the Summer.  It seems to have flown by.  We have been away to Liverpool for a weekend, and also York which we all really enjoyed.  We also went to our first family festival called Larmer Tree.  We were all really surprised at how good this was, and are really keen to go again next year when the girls are a bit older.

We caught up with Kaz from Ickle Pickle’s Life And Travels and her family at Drayton Manor Theme Park.  It was a bit of a wet day by all accounts, but we all still had a lot of fun.  Princess and Ickle Pickle hit it off straight away, which was just adorable.

Kaz and I also caught up again on the Royal Princess Cruise ship whilst it was docked in Southampton.  We had an amazing day touring the ship, and meeting the lovely Chrissie Manby who was launching her new book ‘A Proper Family Adventure’.  We also enjoyed a rather fabulous lunch on the Royal Princess cruise ship, before heading home to Nottingham.  It was raining again for this event, which was rather a shame.  I’ll be sharing more about out visit to the Royal Princess in a later post.

I’m also officially the world’s worst Mum.  You thought it was you didn’t you, but no, it’s definitely me.  Remember those exam results I told you about, that were in fact rather good.  Well, I was a very tired Mum after driving to and from Southampton in a day, and completely forgot myself when I saw teen.  I was that parent that said, ‘you could have done better’. Yes, this went down like a lead ballon, as you can guess.

I think apart of me expected teen to be a bit tougher, and another part of me was disappointed, not in the grades but for teen as I know he wanted A’s.  We have got past this now, but it was a prickly few days.  As money seems to work wonders, I’ve decided not to pay for the remark of his paper he wants, but if he gets A’s next year, there will be some kind of financial reward.  I think this might motivate him to play a little less Counter Strike.

Well that’s us for the time being.  It’s been all go really so we could do with a bit of a quiet patch really.  I hope everything is good with you, and if anything has been happening in your family I’d love to hear about it..