The awful events that took place on Friday 13th have been in and out of my thoughts all week.  France are our neighbours, and I’ve visited Paris a few times.  It’s a beautiful city, where so many people live, work and travel to.  It is unbelievable to me that a group of human beings can inflict such violence on others, taking the lives of mothers, fathers, sons, daughters, friends and colleagues.  What is that going to achieve? 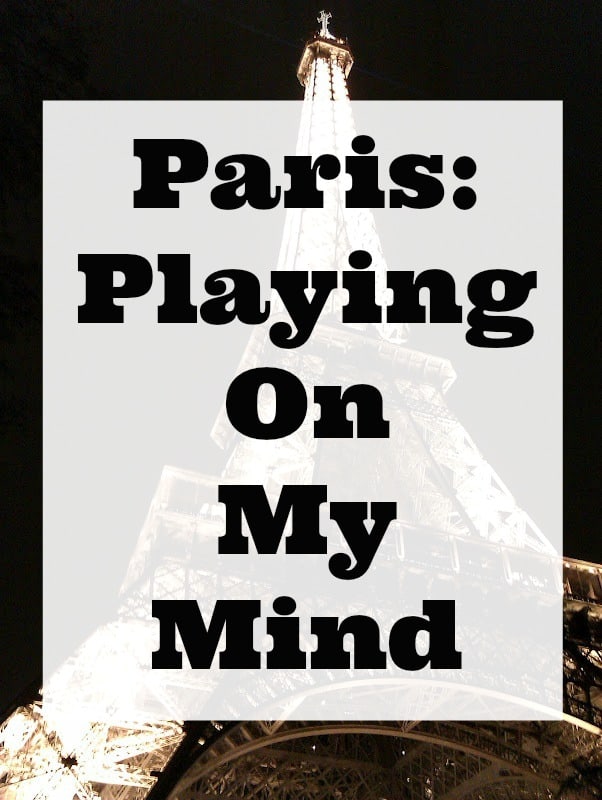 We Are Familiar With Paris

My sister was in Paris only a few weekends ago snapping the Moulin Rouge and exploring the Louvre.  I spent my mini-moon there, in a chic Parisian boutique hotel only a stones throw away from Sacre Coeur.

I have a sense of familiarity with the city and it’s culture.  We have been known to have our disagreements, but the French and the Brits aren’t to dissimilar really.  We can relate to each other, even if we don’t want to admit it.  I think that’s why it’s been in the minds of so many of us.

The stories that come out of the news of how the survivors hid from their terrorist attackers, never expecting to see their family or friends again.  Watching people gunned down, killed or injured on what should have been a relaxing Friday evening on the town.  I cannot imagine the fear that they went through, hearing gunshots and explosions all around them.  It is something that no-one should experience in their lifetime.

It has really brought it home to me that people are suffering the whole world over, and face  gun fire and bombings on a daily basis.  That people are living in constant fear of their lives and that it all seems so senseless.  The media isn’t filled with it everyday though, and are we turning a blind eye to these senseless killings the world over?  Perhaps this approach from the media creates more hate, and the divide between the West and the rest of the world continues to widen as a result.

I have wanted to understand how other countries perceive the West in times like this, and I have a sense that they think we don’t care about the atrocities that happen in other parts of the world.  We do.  The people on the ground do.  But our politics is different, and I guess that is what really divides us.  We enjoy a free, democratic society which we are keen to protect.  It is not without it’s corruption, but our government is not corrupt or a dictatorship.  But we cannot fight every battle the world over.  Governments should protect their people and allow them to enjoy similar human rights, but this can only change from within at the end of the day.

I’ve searched online what the press are reporting in other parts of the world, and a Syrian News site makes for interesting reading.  Of course I am under no illusion that some news channels are controlled by their governments, but they are still reporting some interesting slants on the Middle East situation that I had not heard before.

They talk about the West not wanting to take full control of the ISIS terrorists as they want a strong enough resistance in Syria to over throw the current political regime.  The recent air strikes by France are said to have had little impact, as they targeted abandoned ISIS camps and training centres.  Were they just for show?

Are the West stuck between a rock and a hard place with the current civil conflict in Syria?  The migrant crisis is still an issue for Europe, and now we have a different slant to the problem as we believe that one of the Paris attackers was carrying a Syrian passport.  This will have an impact on the ability of genuine migrants to be able to find safe refuge in Europe and America.

America have agreed to allow 10,000 migrants resettle in the US over 12 months, but a significant number of states will refuse to co-operate with the resettlement program.  This realistically isn’t going to be a safe place for people to flea as Islamic phobia grows.

I see a world becoming more and more divided as events unfold after the Paris Attacks, and I suspect that was part of the ISIS agenda.  In order to continue to grow they need to demonise the West, and fuel hatred amongst their followers.  They use religion as a way of controlling their army, and make promises from a ‘god’ that will never come true.

How does it stop?  I have no idea, but it feels like there are too many battles being fought at once.  When there is the migrant crisis, the Syrian civil war, and the fight against ISIS which one is more important?  President Putin is calling on Europe and America to help support the fight against ISIS.  Should we join him?  He believes that funding for ISIS activities is coming from 40 countries and some funds are coming from people living in the G20 countries. This needs to stopped to make any real ground in the battle against these acts of terrorism.

I have not reached any conclusions as I suspect there are many issues that we don’t understand and the thing that is of course important to everyone is oil.  How this factors in the political decisions of the West I have still to understand but what I do know that is it is not clear cut.  I’m not sure that air strikes are the answer, and there is something about the French response that feels very knee jerk, even though I can understand why you would do this for the people you have lost and been affected.

I suspect the answer to these issues, and to stop the Middle East descending into complete chaos is far more strategic than taking to the air and firing missiles.  All I can ask people to do that are reading this post, is to take an interest in this global issue.  ISIS are a minority of radical religious extremists, lets not forget the other 250,000 innocent people killed in Syria or those forced to flea or are displaced in their homeland.  I have faith in the British government at times like this.  I disagree with some of their home policy, but when it comes to fighting terrorists and terrorist acts, I know they will do their utmost to protect us.  It’s how they stop the spread of ISIS that will be the interesting part.