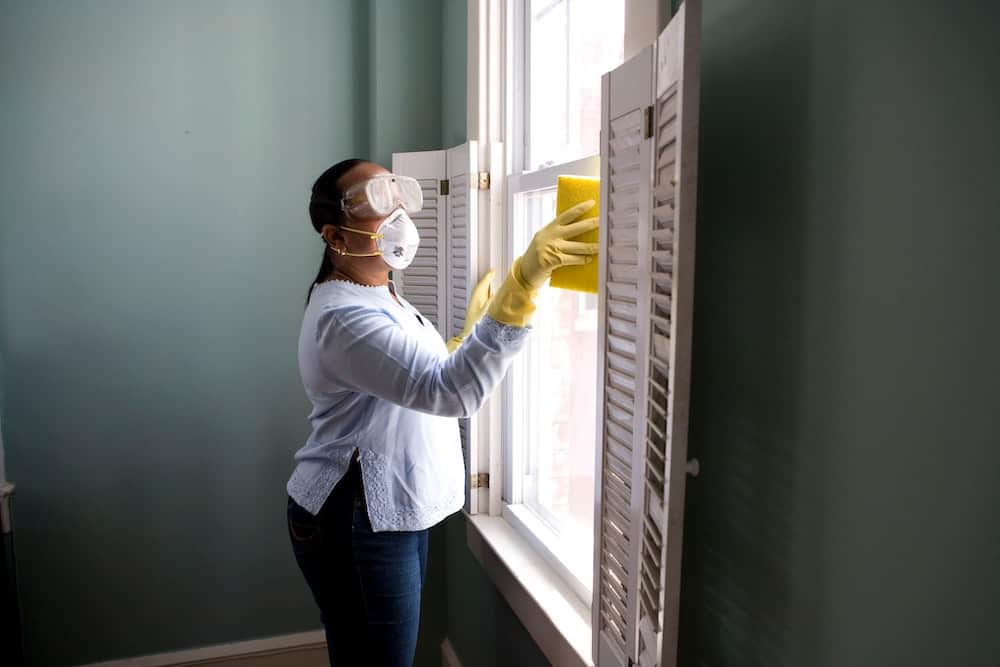 Mould on interior walls doesn’t just look pleasant and it can severely damage your health.

We are going to talk about how to get rid of it, but first let’s explain what causes mould on walls. Simply,  it is often a result of condensation. When warm moist air comes into contact with a surface at a lower temperature, the moisture condenses onto it and after a while, mould starts to grow on the surface.

Depending on the amount of mould, it could also suggest a larger problem in your home. It could be the result of a larger fungi infection, caused by high humidity that has a black or green appearance and looks slimy. If left untreated, the fungus can release toxins into the air that may have a negative effect on your health.

To prevent that, we give you some tips on how to remove mould from your walls:

Safety first! Mould can cause severe respiratory symptoms and skin irritation, so always wear a filtered mask to avoid breathing in mould spores. To prevent skin reactions, wear rubber gloves, a long-sleeved shirt, and trousers that you can launder in hot water to kill any spores they might pick up.

Unlike office cleaning where you can clean a lot easier, at home things aren’t always so easy. First, clear the area of items, curtains, plants and other objects. If you can’t remove something — like a heavy sofa — cover it with plastic sheeting and use painter’s tape to secure it. Protect the floor where you’ll be working by covering it with an old towel or plastic sheeting to catch the drips. Also, since mould spores can travel easily in the air, protect the rest of your home by shutting the door to the area where you’ll be working.

End of tenancy cleaning Reading recommends that in order to remove mould, mix a solution of one part bleach with three parts water in a spray bottle, and thoroughly spray the mouldy areas of wall. While you do that, open a window and/or keep a fan running, because bleach fumes are unpleasant and can be irritating to the lungs. Let the bleach soak into the mould on the walls for several minutes, then use a stiff-bristled brush to remove the stains. After that, rinse with a cloth and water. Leave to dry completely. If the stains are extensive or deep, you may need to repeat the process for better results.

If there are still some mould marks left, that means the fungus is only killed on the surface of the wall and it’s likely to reoccur, sometimes within days. Unlike car mould removal where you need unique products to achieve real effect, to kill mould beneath the surface of a wall, spray undiluted white vinegar onto the affected area and let it dry. Don’t worry about the odour; the smell will dissipate once the vinegar is completely dry, but in case the smell is unbearable to you, you can add essential oils to the mixture to make it more tolerable.

Another solution is to use products specifically formulated for mould on walls that may be stronger, but remember never to mix cleaning solutions together as this can cause dangerous chemical reactions and it can become a problem if you provide office cleaning services.

Do you have any more tips for removing mould and reducing condensation in your home? Leave them in the comments below.

WFH? How to Turn Your Garden into a Workable Space

My Friend’s Floors are Always So Clean. Why is Mine Not?

How to Reduce the Carbon Footprint of Your Home